Italy's military history spans some 3000 years, from Etruscan and Samnite warriors, to Roman legions, to medieval knights and crusaders, to the condottieri of the Renaissance, to the Arditi shock troops of World War I, the commando frogmen and Folgore paratroopers of World War II, and other elite military units such as the Alpini, Bersaglieri and Carabinieri. This site offers photos, images and historical information pertaining to Italian military history throughout the past 30 centuries.


General Nino Bixio (1821-1873) was an Italian general, patriot and politician, and a prominent military figure of Italian unification.

He was born Gerolamo Bixio in Genoa. While still a boy, Bixio was compelled by his parents to embrace a career in the navy of the Kingdom of Sardinia. After numerous adventures in various places of the world, he returned to Italy in 1846, joining the Giovine Italia. On 4 November 1847, he made himself conspicuous at Genoa by seizing the bridle of Charles Albert's horse and crying, "Pass the Ticino, Sire, and we are all with you."

He fought through the campaign of 1848, became captain under Giuseppe Garibaldi at Rome in 1849, taking prisoners an entire French battalion, and gaining the gold medal for military valour. In 1859 he commanded a Hunters of the Alps battalion, fought in the Battle of Varese, and gained the Military Cross of Savoy.

By August 21, Bixio and the Garibaldines entered in Reggio Calabria, in the Neapolitan mainland. He took part in the Battle of the Volturno, where his leg was broken.

In 1866, at the head of the seventh division, he covered the Italian retreat from the Battle of Custoza, ignoring the Austrian summons to surrender. Appointed senator in February 1870, he was in the following September given command of a division during the movement against Rome, took Civitavecchia, and on 20 September 1870 he participated in the capture of Rome, which completed the unification of Italy.
at September 16, 2018 No comments:

Brief History of the Wars Between Venice, Genoa and Pisa 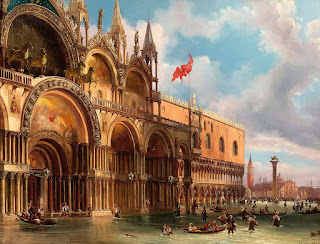 1. Clearing the Western Mediterranean of Muslims

Initially, Genoa and Pisa were allies. They collaborated in freeing Sardinia and Corsica from Saracen control. The pope, to reward them, granted them joint control over these islands. They were to be the vanguard of protection against further Muslim attacks. But it also meant that there was now a lot of trade and money at stake.

Pisa struck the first blow. In 1241, at the Battle of Giglio, using as a casus belli the fact of a conflict between Holy Roman Emperor and the Pope, they allied with the Sicilians and decisively defeated the Genoese fleet.

Genoa was down, but not out. Florence was also growing and looking to acquire a sea port. Pisa, then, had to worry about two simultaneous enemies. The pressure proved to be insurmountable. In 1284, at the Battle of Meloria, Pisa was defeated by Genoa, its fleet nearly annihilated.

After this, Pisa became easy pickings. Porto Pisano fell to the Genoese a few years after the battle of Meloria. And a weakened Pisa would in time fall to a rising Florence.

As an unforeseen aftereffect of the Crusades, there was a lot of money that came from transporting crusading armies to the Levant, supplying the crusader kingdoms, purchasing goods there, and selling those goods back in Europe. Competition for that trade led to conflict between Genoa and Venice.

Unfortunately for Genoa, their conflict with Venice started long before they had defeated the Pisans. Venice defeated Genoa in the War of St. Sabas, 1256-1270, with the help of the Pisans. The war was not enough to permanently cripple Genoa, however, and they plotted their revenge by engineering the overthrow of the Latin emperors of Constantinople and their replacement with a returned Greek dynasty that rewarded them with the trading contracts which the Venetians had previously enjoyed. Flushed with the money from this venture Genoa rebuilt its fleet and severely defeated Venice in 1298 at the battle of Curzola.

But structurally speaking Venice was still in a better position.

The main problem faced by Genoa was internal division. Whereas in Venice the aristocrats were definitely in charge and could impose their will on foreign policy, in Genoa there was constant division over how much to sacrifice and how vigorously to prosecute the war against Venice. And in terms of resource mobilization, Venice had a clear edge.

After many more conflicts, the Venetians finally won at Chioggia in 1380. They would have supreme control over trade in the Mediterranean until the Turks arrived.
at September 13, 2018 No comments: 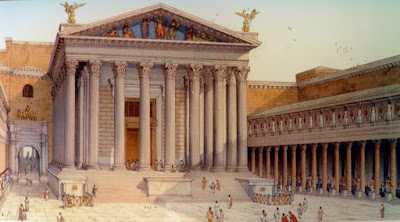 "In defensive operations, ingenuity is of more avail than machines."

Vitruvius served in the Roman army as an artilleryman under Julius Caesar. As an army engineer he specialized in the construction of ballista and scorpio artillery war machines for sieges. He is best known, however, for his treatise on architecture: 'De architectura'.
at September 02, 2018 No comments:


General Umberto Nobile (1885-1978) was an Italian aviator, aeronautical engineer and Arctic explorer who developed and promoted semi-rigid airships during the period between the two World Wars. He is best known as commander of the famous 1926 flight around the North Pole in the airship Norge, piloting the first aircraft to ever reach the North Pole and the first to fly across the polar ice cap from Europe to America.

A popular hero in Fascist Italy, in the 1930's Nobile defected to the Soviet Union, helping to develop the Soviet semi-rigid airship programme, which strongly hurt his reputation in Italy and Europe. Despite this, he was allowed to return to Italy to teach in December 1936, before going to the United States in 1939 to teach aeronautics at Lewis University in Romeoville, Illinois.

After World War II he was reinstated and promoted to lieutenant general of the Italian Air Force, but his involvement in Communist politics helped solidify his negative reputation among many western historians.
at August 30, 2018 No comments:


Caserma Ermanno Carlotto was the main military building of the Italian Armed Forces in Tientsin, China. The barracks was built in 1926, during the period when Tientsin was a concession belonging to the Kingdom of Italy (1901-1947). It was named in honour of Ermanno Carlotto, an Italian soldier who fell during the Boxer Rebellion, and who was posthumously awarded the Gold Medal for Military Valour. Today it is still in use and houses a division of the Chinese paramilitary police.
at August 24, 2018 No comments: